It’s Time To Plan For Spring 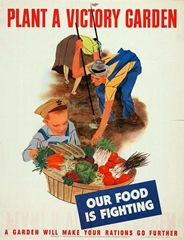 Short nights and cold dreary days are with us again.  The lack of sunlight affects some folks with the loss of energy and even takes the shine off their normally positive disposition.  Is it going to be a long winter season for you too?

There is a way to mitigate this problem to a large degree.  Plan your 2012 garden.  If you haven’t already ordered seed catalogs for the coming season, go online and order them soon.

My favorite catalog is the “Baker Creek Heirloom Seeds” catalog.  It is full of great color photos of warm weather and sometimes strange looking but exciting varieties for the garden.  Baker Creek carries the “old” seed varieties. You won’t find any highly modified tomatoes that were developed to fit square holes in a carton regardless of the taste.  Instead, you’ll find the great tasting, high producing varieties of fruit and vegetables seeds obtained from master gardeners around the world.

If you have struggled to get your children or grandchildren interested in gardening, invite them to join you in planting “Orange Fleshed Purple Smudge” tomatoes or a few bushes of “Dragon’s Egg”, “West India Burr Gerkin”or “Green Apple” cucumbers along with a few rows of “Monkey Tail” beans.  How can they resist joining in?

I’m not making these names up.  They may sound like they originated in a fantasy novel, but they are anything but fantasy producers.  When the winter blues get you down, open your seed catalog wish books and escape to summer weather in your mind.  Make a list of some new tastes and irregular forms that you want to see in your garden this year.   And remember, the seeds from these heritage plants are easy to store and regerminate for use in your 2013 gardens.

Recent financial troubles around the world have brought a bright focus on governments (including our own) and people who have long lived beyond their means.  In countries such as Greece where the financial hammer is slamming on the heads of its residents, we see articles like the series I’ve been following for a few months:

Are they serious?  Unfortunately, yes.  Greek citizens are struggling to feed their families let alone pay their bills.  Unemployment is extremely high, credit is extremely tight and ready cash for things like food and rent is extremely hard to find.  “Extreme” being the common descriptive word in all of the articles.

The stories are real.  They are stating facts about a first world nation that is on the ropes.  Greece is being followed by Italy and other European nations into a morass of unsustainable debt, loss of purchasing power and liquidity.  It could happen here in the blink of an eye too.

I’m old enough to have parents and siblings who struggled to live through the Great Depression, World Wars and economic instabilities.  I grew up thinking you had to use it up, wear it out and make do because my parents knew that their current day good fortune could evaporate almost instantly just as it had several times before.

One thing has always stuck in my memory.  My mother made wonderful meals, but the ingredients always varied depending on what leftovers were in the fridge.  She couldn’t make the same cake twice in a row because the left over pancake batter, melted butter, half dried out orange or bottom of the bottle flavoring concentrate didn’t exist the next time she made cake.  They would be replaced by something else that ‘needed to be used up before it goes to waste’.

I remember all of us boys asking for the recipe of a cake that was so good we devoured it BEFORE Thanksgiving dinner.  “That was terrific Mom.”  “What did you put in it this time?”  “Can we get the recipe?”  And of course, she couldn’t give us an exact recipe because it was made from some of this and some of that and who knew what else.

We live in a world of preassembled food and mixes that contain ingredients measured almost to the grain of sugar to insure consistency.  How many of us cook most of the time from ingredients being rotated through our food storage?  How many of us make cakes like my mother did … with some of this and some of that and never a measuring device being used in the whole process?

If we don’t cook this way, now is the time to migrate to that process so we know how to make good meals or at least tasty meals from what we have on hand.  We are riding on a financial bubble in America right now whose cellular wall is of ever thinning integrity.  If bad times come, they could arrive almost instantly.  If your parents are still alive and have some old but tried and true World War II recipes, it may be a good idea to get a copy of them and whip them up a time or two just in case.