The production from our straw bale garden was so good in 2015, we decided to expand it for 2016.  We purchased the bales from a local seed store this year.  The bales were shorter, less dense and since we've started watering the plants in them, have found that they have a lot of grass seed in them.  We'll purchase straw from the farmer again next year.

We used the same drip watering and plant suspension systems that we used last year.  The only difference is the addition of 8 ft of length on the bales and the support structure.  Click here to read all of the construction details and season growth photos from 2015.

This post covers the 2016 growing season with photos and discussion added throughout the season.  We can already tell that using straw bales was the right choice again this year.  We've added peppers, spaghetti squash and cucumbers to the bales in addition to a dozen varieties of tomatoes. 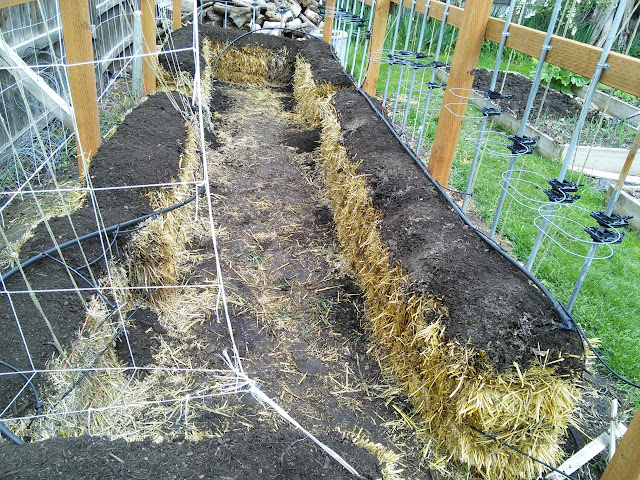 View of the bales covered in compost after being treated for 10 days to prepare them for planting.  We are using tomato rings on electrical conduit, gardening twine and nylon garden mesh for support again this year.  We are also testing plastic tomato support rings this year. 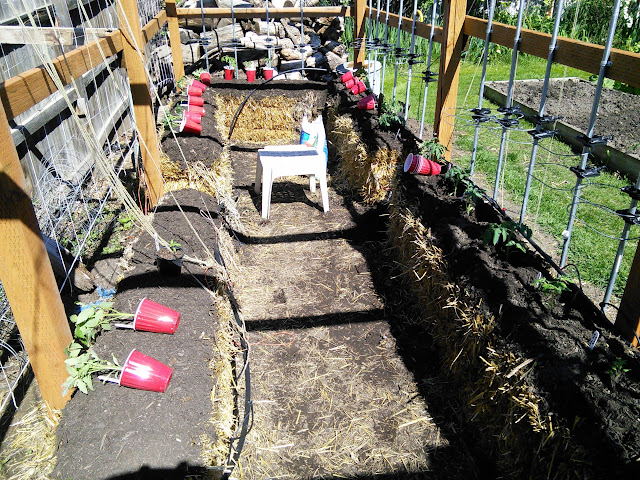 Planting tomatoes and peppers that we grew in our greenhouse.  All you have to do is create a hole in the bale by thrusting in a gardening trowel and pulling the straw apart enough to accept the root ball of the plants. 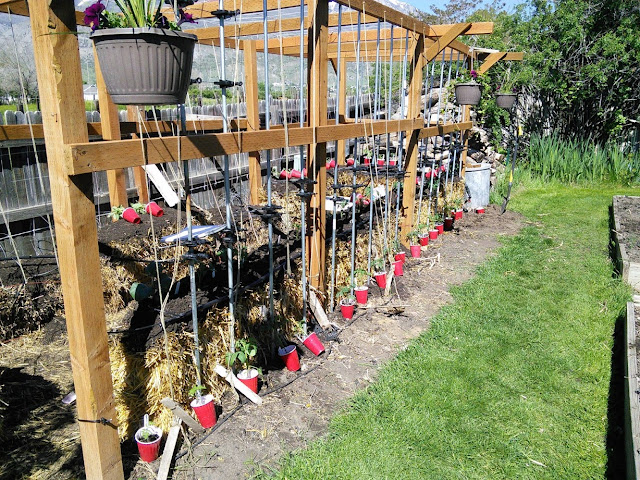 Once again we planted tomatoes directly into the ground on the outside of the support structure.  The ground in this strip is nutritionally rich being composed of almost 12" of compost from our large compost pile and 2" of yard soil. 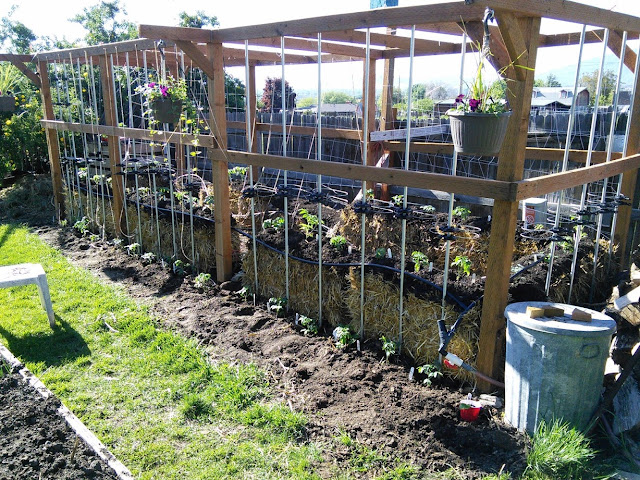 The straw bale garden was planted on 11 May 2016, after the last normal frost date in Utah. 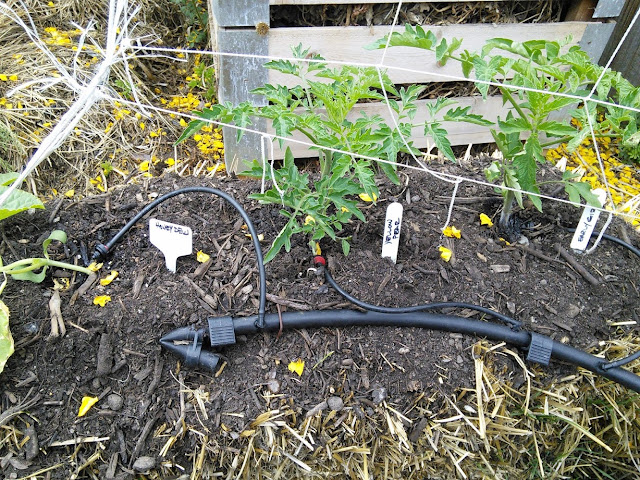 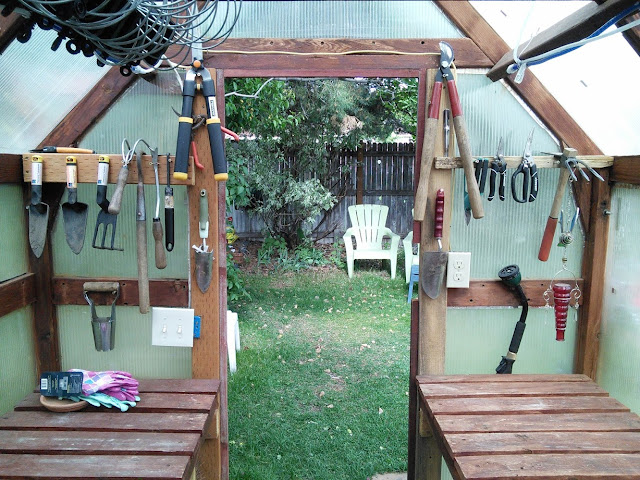 The greenhouse was empty for the first time in several months. 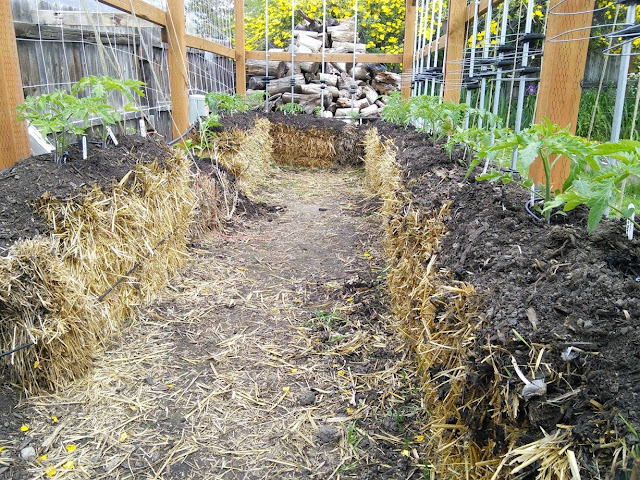 One week after planting.  The tomatoes were already well established and growing. 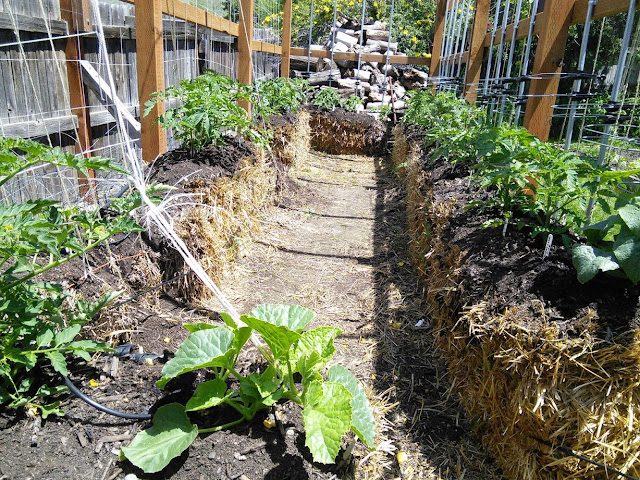 The squash and cucumber plants love the straw bales.  The peppers took a little longer to form an equal growth rate. 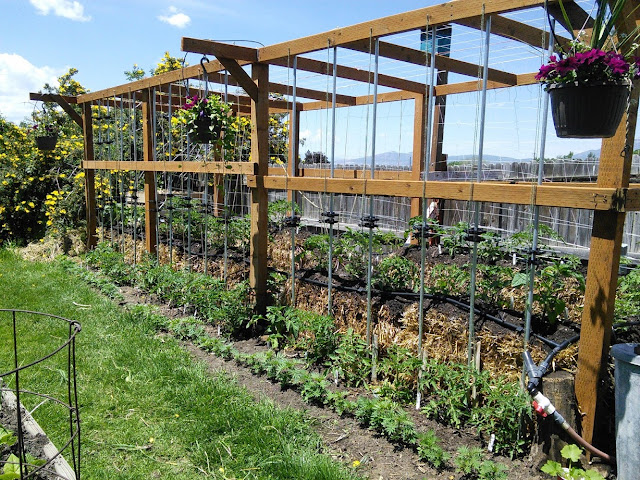 We added a row of marigolds from the greenhouse in front of the ground planted tomatoes for both color and some protection from garden pests.  The hanging flower baskets are watered by the drip system too and the plants have begun to establish themselves. 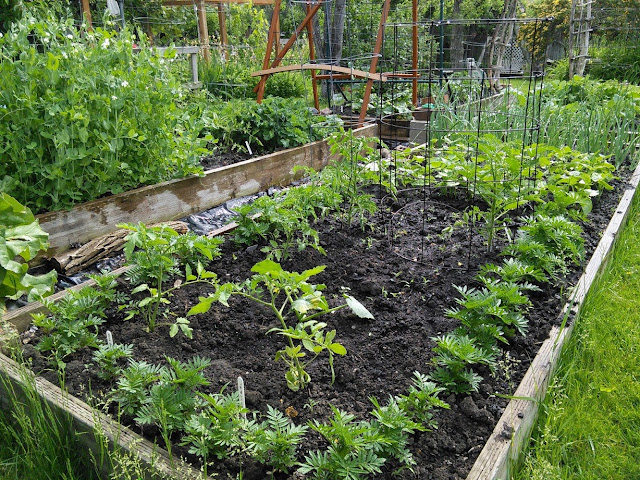 Plants in the garden boxes are growing well.  We added a few new (to us and thus experimental)  tomato plants to them this year.  The "A-frames" in the background will be covered with cucumbers to a 10ft height in 45 - 50 days. 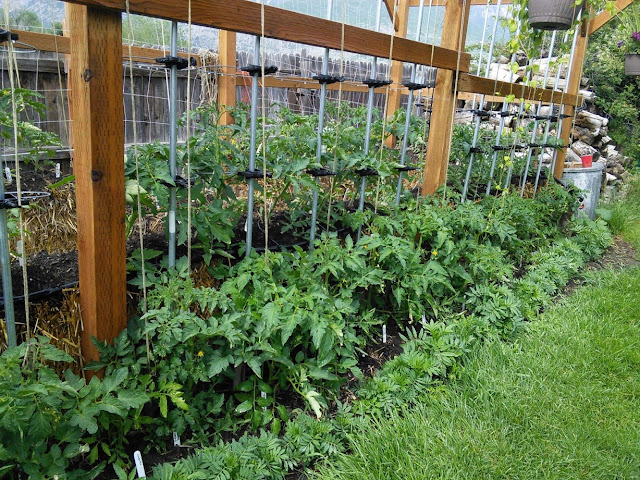 The ground plants are growing as fast as the plants in the straw bales thanks to the rich growing medium in which they were planted. We are using plastic support clips this year that attach to the normal garden twine.  Wrapping the tomatoes around the twine works well but some of our tomatoes started to slip down last year due to the weight of the fruit.  This year, we are combining clips and some twine wrapping for the larger sized fruit varieties.  We picked many 1lb plus fruits from them last year.  One plant had almost 100 - 1lb plus sized fruits on it at the same time, hence the weight / support issue. 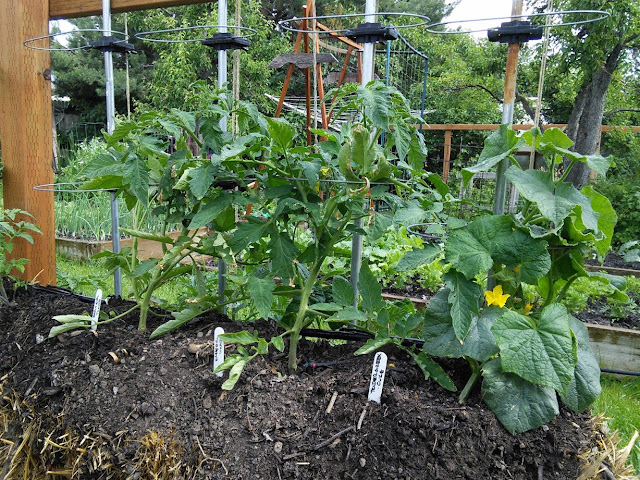 The plants are now growing between 1 1/2" and 2" a day.  They are reaching for the 2nd support ring and will soon be supported by it. 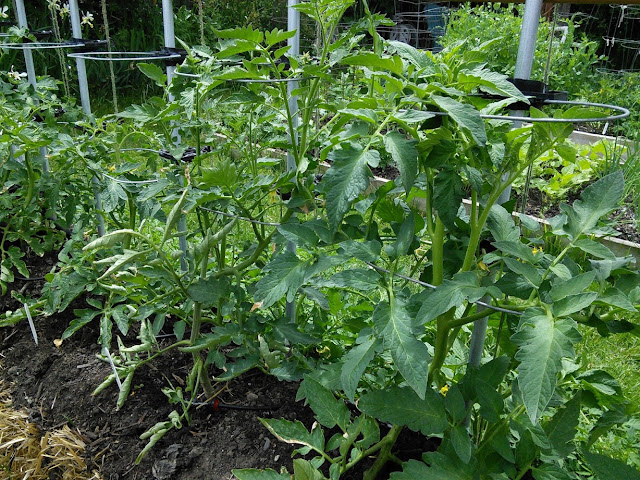 Three days after the previous photo.  The plants have grown 7" and now extend through the 2nd support rings in many cases.  This growth rate will continue for the next 45 - 55 days when the heavy production of ripe fruit will begin in earnest. 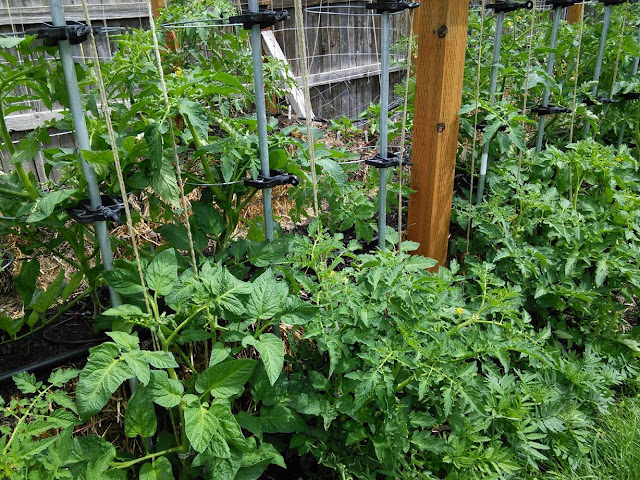 The ground planted tomatoes are also growing 3" a day.  The Brandywine variety are growing 4" a day. 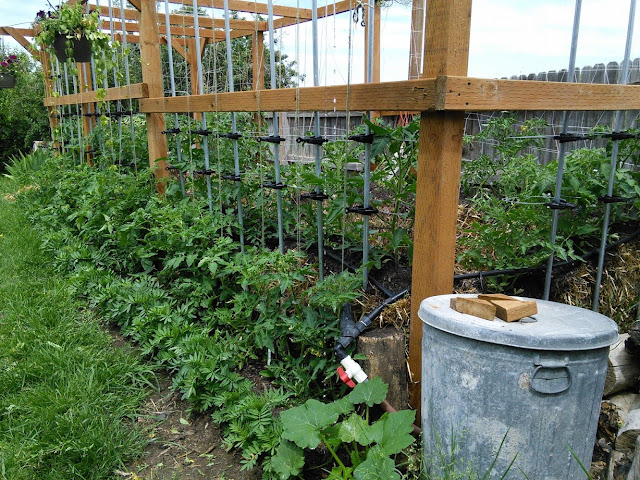 The straw bale garden 3 weeks after it was planted.  Extreme growth will continue during the coming weeks.   All of the plants are constantly pruned for suckers and some of the bottom leaves and branches.  We left most of the bottom leaves on last year and the production rate didn't seem to suffer.  We will probably leave the bottom leaves on again this year because our grandchildren love to play in the "green room".  By the 3rd week of July the ceiling of the support structure should be fully covered with tomato vines, at which time the "green room" becomes the "haunted forest" according to the wee ones.

It may not seem possible but the tomatoes are growing almost 3" a day overall.  Note the difference in their heights between the above photo and the one below.  The magic comes from prepared straw bales, compost and plant food.  Then plan on adding support to the plants almost daily for the next few months. 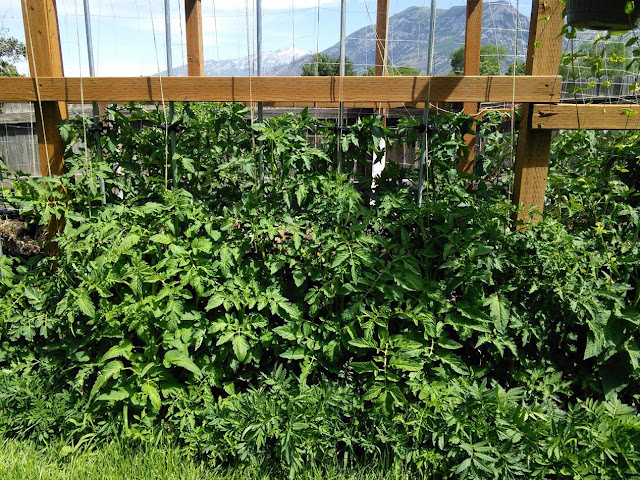 The growth rate continues at just over 2" a day.  The weight of the plants is starting to hold them back from stretching upward at a 3" per day height gain now.  The stocks of most of the plants are about twice as thick as my (a man's) thumb.  Some of the plants have now topped the 4th ring in the ring supports.

The tomatoes growing in the front of the straw bales were planted in 12" of rich compost.  They too are growing at an amazing 2 1/2" a day.  Many of them are now 5' tall.  All three of the Brandywine varieties continue to lag just behind the Early Girls in growth.   All of the Early Girl plants are covered in green tomatoes.  We are a little surprised that the Golden Rave's are growing at a much slower rate than any of the other varieties.  This is the first year we have tried that variety and aren't sure what to expect from them.   Of interest, two of the Yellow Pear plants are now over 5' tall.  The Pineapple, Black Vernissage and Cherokee Purple plants are holding their own.  All three varieties of the Beef Stake's are about the same height as the other plants that produce large fruit.  The Rutger's plants started slow but are rapidly catching up with the other varieties now. 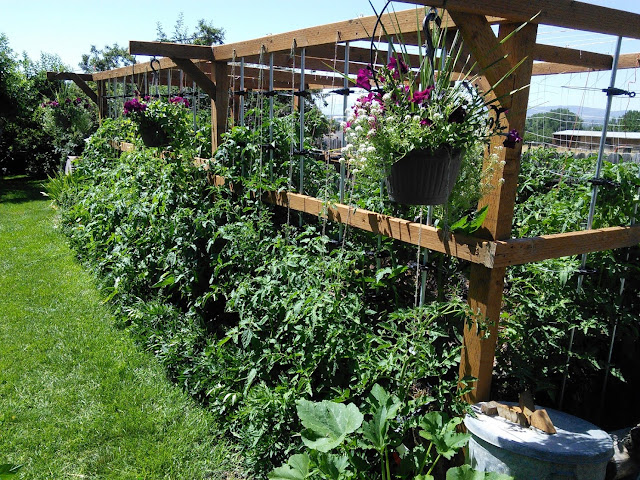 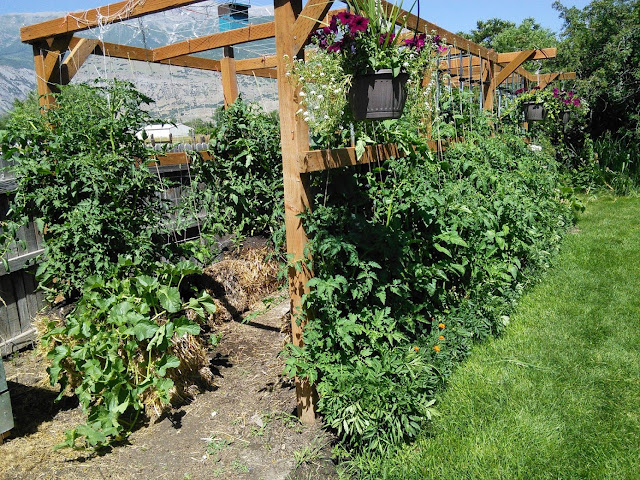 30 June 2016
The weight of the plants is starting to slow their height even though they are all supported multiple times along their length.

Many of the plants will be taller than the support structure in a couple of days and I will train them over the top to be supported by the netting that covers the 'roof' of the structure.

The Early Girl plants are well populated with fruit as are the Yellow Pear plants.  The larger varieties are now setting fruit as well.  All of the plants are covered in blossoms.  The pepper plants in two of the bales look tiny in comparison even though they are 16" tall. 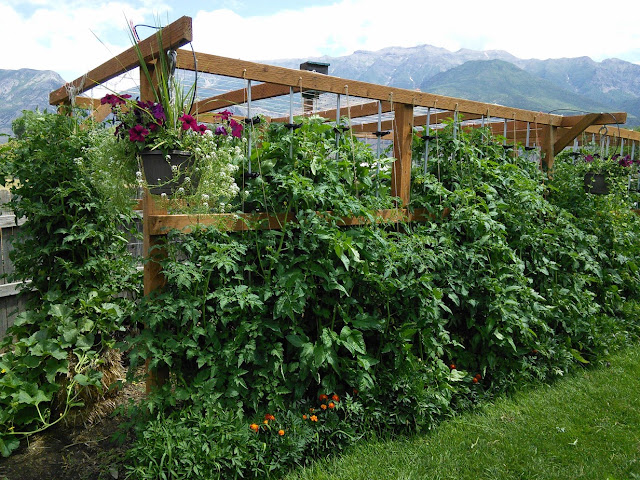 7 Jul 2016
The majority of the tomatoes have grown taller than the support frame now.  They will be trained over the "ceiling" in the coming days and will be supported by the garden netting that covers it.

The Early Girls are fairly heavily populated with green fruit as are the Yellow Pear.  Some of the larger variety of fruits are now setting tomatoes as well.  The Golden Raves are surprising us this year with early setting of fruit.

The heat has really brought growth to the plants. We are now seeing between 3 1/2" - 4" of growth per day.  Most plants have set fruit.  Some of it is sizable now and will be ready to harvest in the not too distant future.  The cucumber plant growing in the bales is producing  5 - 6 cukes a day.  The melon planted in the bales has vines about 10 ft long and has set numerous fruit.

Many of the tomatoes are now over 8 ft in height and we have started training them over the ceiling netting of the support frame.  If the current rate of growth continues, they should completely cover the ceiling / roof by the 3rd week of July.  As a reminder, we didn't set the plants out until the week after Mother's Day and they were about 5 - 6" tall at that time.

The weight of the plants is starting to pull the support netting down on the walls.  Fruit is setting heavily on all but the largest varieties.  They will produce fewer fruit but their fruit will be considerably larger in size and weight than the early producing plants. 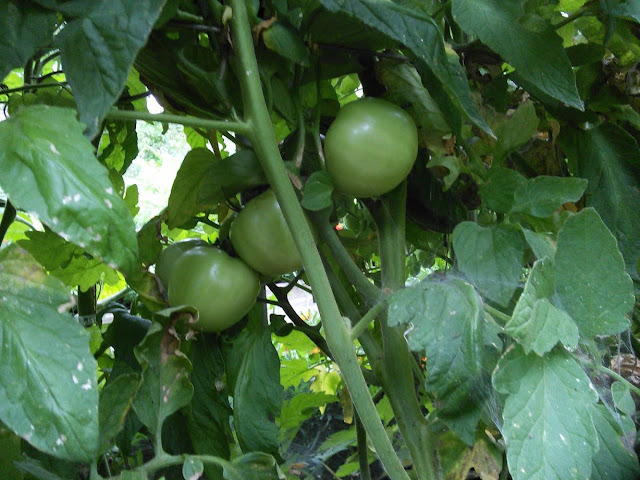 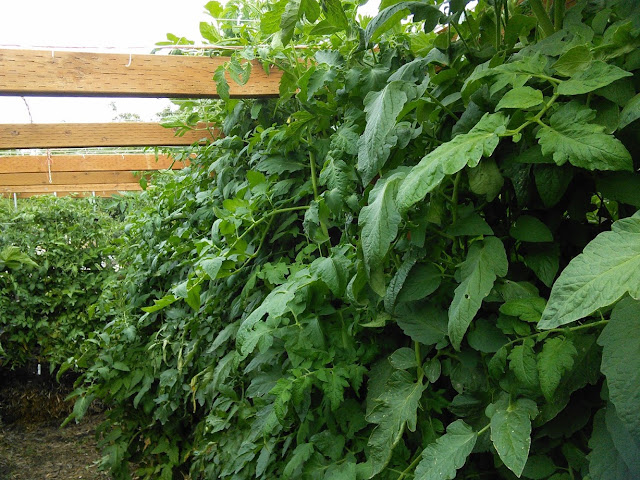 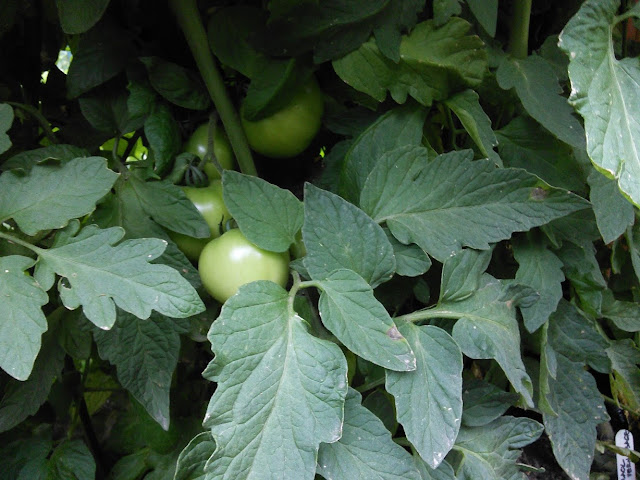 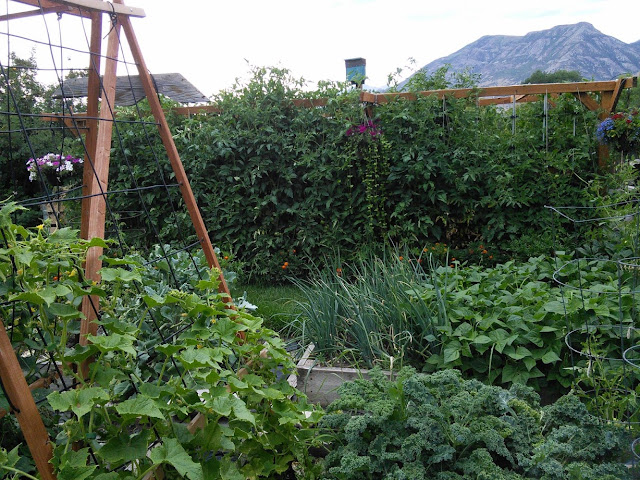 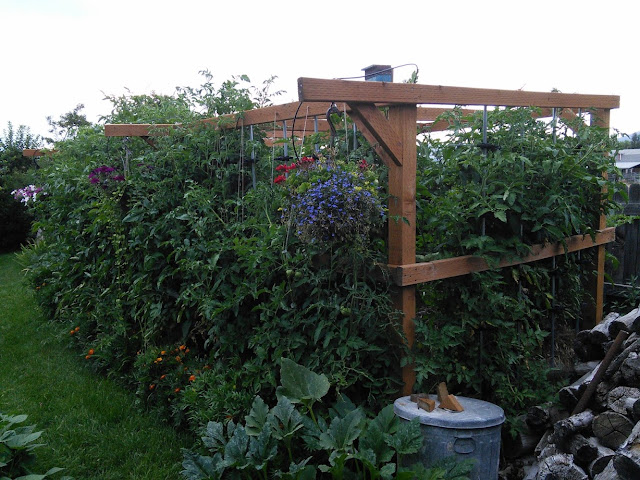 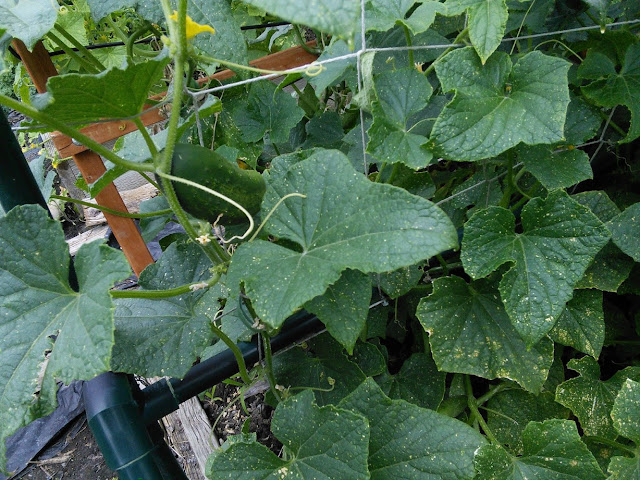 The tomato plants have topped 9 ft in height and are starting to cover the "ceiling" of the support structure.

We highly recommend straw bale gardening.  Read about the design and the simple instructions to build them along with the support methods we use in this earlier post.

The tomatoes are producing fairly profusely now.  The large varieties weigh so much, we are having to constantly add additional supports to the vines to support their weight.

The harvest has begun in earnest with several bushels of fruit being harvested every few days.  We wondered if we would be able to eat all of the spaghetti sauce, relishes and juices from the harvest last year, but a few visits from grandchildren quickly remedied any concerns on that topic.

The tomatoes in the straw bale garden continue to produce heavily even though it is the end of September.  We have bottled them in almost every variety of tomato product imaginable, given them away and eaten bowls and bowls of them with meals and in salads.

Total production for 2016?  It is somewhere north of 1000 lbs.  Even with the cost of new bales each year, fertilizer, and the initial support structure and watering system, we are well ahead on cost per pound when compared to buying the fruit.  The fixed cost for the coming years will be the cost of new bales at around $4.00 each and a little fertilizer.  We save seeds, so we won't need to purchase them each year unless we want to try varieties that we haven't grown in the past.