Is That A Mummy In Our Food Storage?

We’ve always been concerned about being prepared for difficult situations from loss of income to a failure in the food chain for any reason.   So, as young married folks we started our food storage regimen. 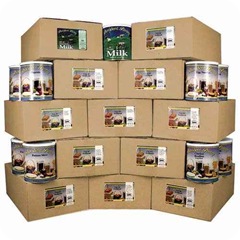 when stores sales came around.  We slowly added freeze dried #10 cans of basics from time to time by applying our federal and state tax returns to their purchase.

The stuff on the shelves was rotated and eaten as a normal course of living and even ‘saved our bacon’ from time to time when the need to pay for a doctor and hospital expenses associated with a new baby or the subsequent broken arms and orthodontic expenses that are part of the lives of young folks.

The freeze dried foods were supposed to be good for “30-years” or so said the still attached advertisements on the labels.  How the company knew this is beyond me now, since they had only been in business for 5 years when we purchased their products, but the number stuck in our minds and it was easy to leave the cans in their original boxes that were safely tucked in the back under other ‘stuff’.

The cans still look as clean and sharp as they did on they day we received them.  They’ve moved from home to home and have been stored in bedroom closets, crawl spaces, basement storage rooms and as support for kids beds.  They’ve admirably occupied the space they were given all of this time and filled the role that we’ve assigned to them in our minds.

Feeling adventurous, I donned my pith helmet, headlamp and a work shirt before beginning the ‘dig’ to exhume these ancient treasures.  My ‘Raiders’ fedora remained hung on the wall.  I own this museum

The ‘stuff’ on top of them must have gained weight over the years according to my back.  Calories quickly  evaporated during the debris removal process to get to the treasure.  It was easy to date the materials as I moved them based on the evolution of my hand writing that was exhibited on the boxes.  Drafting to engineering to management tilt and inflections surfaced.  Actually, it was in the reverse order based on time but this old explorer took that into account before asking for carbon dating.

Treasure!  The Sam–Andy cases were exposed to light for the first time in a long time just like the statues found under the sea at the Library of Alexandria in Egypt.

How did the products look when the cans were opened?  They were originally nitrogen packed and as far as I could tell, the nitrogen was still in place.  The grains, pasta and beans looked like any that you’d buy today.  The powered milk was solid and will make great foundations for new porch posts.

How did they taste?  Fine.  Did they have any nutritional value after all of this time?  I don’t know.  They were filling when consumed.  We didn’t loose any weight after eating them (for any reason) but we weren’t trying to live on them exclusively either, so the long term effects of eating them exclusively was lost.

The 40-year-old toilet paper was a mixed bag.  The ‘hard’ kind was as good as the day it was purchased.  The ‘soft’ kind had air slagged and will only be good as fluff used to to start fires.

Someone with the knowledge and skills will have to tell us if the old Sam-Andy food still had nutrition but because of the food types, it was still readily recognizable in its original form.

I can’t say the peaches from an errant jar found in the dig can make the same claim.  I’m not even sure the old Kerr bottle is as clear as it once was.  Maybe the blue color comes from being cold --- not old?

Moral.  Store food.  Use it.  Rotate it.   Build up some cushion in your food bank to bridge rough spots in the road ahead while you can.  Don’t be trapped on a financial or availability hole looking up hungry and wondering how to get out and how to feed your family.